Mall Story: The Last Visit To The Mall

by an Anonymous contributor 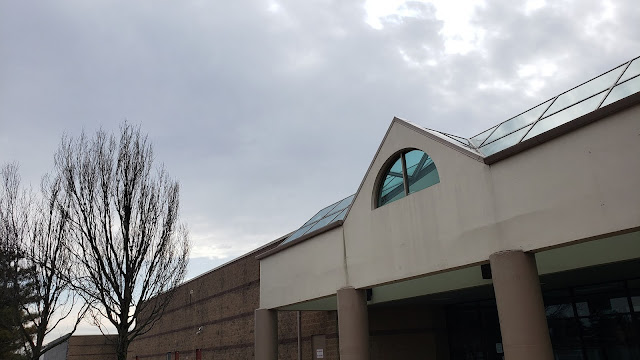 Today is February 15th, 2020; or in better terms, a Saturday. A Saturday just like any other. Families were out-and-about in Phillipsburg partaking in the ritual of weekly shopping. The nearby ShopRites and Walmart-like stores of Route 22 were filled with cars and shoppers, but not where I was. I was sitting in my car by the Sears parking lot of the Phillipsburg Mall, unwrapping my lunch from a drive-thru restaurant at the front of the mall’s property, and staring at the empty, pothole-crippled parking lot.

James Taylor’s Country Road was playing in the background on Lehigh Valley’s own 99.9 The Hawk, the only radio station my car’s stereo could play at the time,  the rhythm and lyrics of Country Road could perfectly describe the day February 15th was. The taste of my lunch could have also described the day: bland, neutral, cold, and even melancholy, in some respects. The week was not normal for me. My two-weeks notice at my job ended, and I was now out of work. Relationships were changing - and some ending with people who I thought I knew - for good reason.

The mall was my place of refuge: its wide, aesthetically-pleasing corridors were great to walk and ponder the week ahead.

Alright, lunch is over. Time to walk the mall. It’s been three weeks since I was at the mall last; meaning this is the first time since most tenants have been evicted. I pull the door open, and enter into Entrance 5 near the ghost of Sears past. While I would have loved to be greeted with shoppers, open stores, or any sign of human life, ‘none of the above’ was the answer. I was greeted with an empty corridor, and the loud buzzing serenade of the diverse late-80s lighting fixtures. Yes, this is just another normal 2020 weekend at the mall; little did I know it would be my last.

I start walking the mall, first by visiting the graves of the best stores in the mall: Gertrude Hawk, FYE, Waldenbooks, Radio Shack, Learning Express Toys, Dollar Tree - and the most recent death - Payless Shoesource. The recently boarded-up Sears entrance reminded me that the mall is no longer what it was many years ago due to a neglectful parent, Namdar Realty. I’ve made it to the AT&T now, just next to the long-gone Suncoast store.

A father and his teenage daughter are walking slowly, and stop in front of the AT&T. There’s an irrefutable look of bewilderment, concern, and confusion on their faces. They must have come here to get a phone serviced at AT&T, I thought to myself. I then call out to them “AT&T is closed, you know.” The man replies in a somber tone, “We know. We’re just looking.” I then realize that I’ve stumbled upon my own kind: those who remember the mall for what it used to be. “Oh, I see. Sad, isn’t it?”, I then ask. “Yeah”, the man says with a sigh. With the pain in his voice, I believe that he may have grown up at the mall when it first opened.

After the odd, short conversation ended, I continued my walk, making my way through the center of the mall now, passing the remains of The Bon-Ton, H&M, Claire’s Boutique, and now even GameStop, which I thought would have never closed even in a million years. There’s a slight crowd as I neared towards Kohl’s, - the mall’s only true anchor left - but the only reason there’s a group or two here and there is because Black Rose Antiques announced their eventual closure a week earlier, and closing sales/liquidations were beginning for several vendors.

I look across from Black Rose, and there’s several restaurant tables set up in front of the old Coffee Beanery, as I knew it when the mall was popular in the mid-2000s. About a dozen men and women, in their late 70s, congregate for a chat and a walk around what’s left of the mall; likely locals who have met at this mall for many years and seen it through its good and bad. To think that when they sat there, it would only be three weeks before they never could again due to the pandemic, and then the closure of the mall.

I’ve made it to the entrance of Kohl’s, which has few shoppers and sparsely-stocked shelves. Apocalyptic, in ways. It’s time to start heading back out to Entrance 5 on this bland, solemn Saturday, for the last time in my life. I started up my car. I vividly remember hearing Billy Joel’s Famous Last Words on the radio, and looking back on it, it truly sealed the mall’s fate for me:

These are the last words I have to say

That's why this took so long to write

There will be other words some other day

But that's the story of my life

Want to submit your own memories? Click here to start.